The winners of FameLab Trieste 2019

Gigi de Pascale of the University of Trieste and Uriel Luviano of SISSA are the winners of the local selection of FameLab, the talent show of scientific communication that took place on Wednesday 27 February in Trieste at the Teatro Miela. The two will now go to the national competition in Milan.

Gigi de Pascale of the University of Trieste and Uriel Luviano of SISSA are the winners of FameLab Trieste, the local selection of the talent show of scientific communication, which took place at the Teatro Miela, thus entering the national competition
of FameLab Italy, scheduled for May 8 in Milan.

Trieste hosted the local selection of FameLab for the seventh year. The competition was organized by Immaginario Scientifico, University of Trieste, University of Udine, SISSA-Scuola Internazionale Superiore di Studi Avanzati, INFN-Istituto Nazionale di Fisica Nucleare Sezione di Trieste and Comune di Trieste, within the framework of the Memorandum of Understanding "Trieste City of Knowledge". Trieste Science + Fiction Festival, Science Industries, Radioincorso and Ennergi Research have also collaborated. FameLab Trieste was one of the events in view of ESOF - Trieste European City of Science 2020.

De Pascale, a medical biotechnology student at the University of Trieste, touched on the theme of cancer and the strategies that our immune system has to defend itself, as well as the importance of nutrition in the fight against cancer, telling in an engaging way how a centrifugate of grapes and turmeric can reduce the growth channels of a cancer cell.

The physicist Uriel Luviano, a PhD student in theoretical particle physics at the SISSA International School of Advanced Studies, used his minutes on stage to make real stories about symmetry and parallelism between theoretical physics and literature, where in common there is the game, which teaches and amuses.

Enthusiasm, empathy and confidence in the public to be able to understand any subject, if properly explained: these are the characteristics that the two winners consider fundamental for a scientific communicator. Thanks also to these, de Pascale and Luviano, with their presentations of a rigorous duration of 3 minutes each, convinced the jury, composed of Nicola Bressi (Museo Civico di Storia Naturale di Trieste), Stefano Curti (Teatro Stabile del Friuli Venezia Giulia), Francesco Longo (INFN-Section of Trieste and University of Trieste), Valentina Rapozzi (University of Udine) and Paola Rodari (ESOF2020 Trieste).

Now, in addition to winning a cash prize, they will challenge competitors from the other 11 Italian cities in the national final of FameLab Italy (Ancona, Bari, Catania, Florence, Foggia, Genoa, L'Aquila, Lecce, Pavia, Perugia and Rome). They will also have the opportunity to participate in the FameLab Masterclass, an advanced course in science communication scheduled in Perugia before the final (12-14 April). De Pascale will also have access as an auditor to a course of the Master in Communication of Science "Franco Prattico" of SISSA in Trieste. The winner of FameLab Italy will finally face the other competitors from over 30 countries around the world in the final of FameLab International, which will take place in June 2019 in Cheltenham, England, as part of the Cheltenham Science Festival.

At the station of the university webradio there was finally a group of high school students who participated in the new format of FameLab FameLab EDU: Trieste, along with Catania and Perugia, this year involved the students in an initiative that brings them closer to communication and trains them in public speaking. The students had the opportunity to take a "storytelling" course and learn about the secrets of university webradio RadioInCorso, as well as to actively participate in a live radio show. 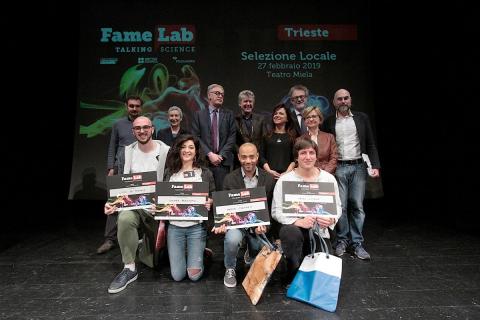